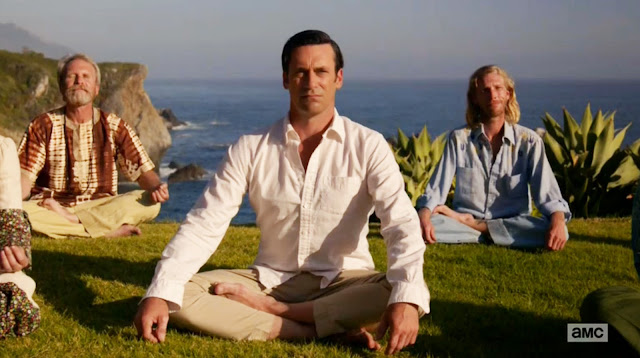 I've been a fan of AMC's series "Mad Men" over the years. It's one of the few shows that I make time for. As the program aged, it had bouts with absurdity but overall, it's held up fairly well.

I feel the same about the show's ending which occurred this past Sunday. There were some aspects of the episode that could have been done better (such as the way that Stan and Peggy were so utterly unaware of the weirdness of their situation) but overall, it was excellent television and excellent drama.

"Mad Men" was good drama because it did more than merely entertain, it also explored larger philosophical questions about what it means to be human and did so in a way that was never didactic and closed-minded.

That brings me to the hotly discussed topic of the final moments of the show which (spoiler alert) featured Don Draper engaging in meditation on a California hillside after he seemingly abandoned his entire life as a serially divorced advertising executive. Immediately thereafter is a cut to the iconic 1970s Coca-Cola ad "I'd Like to Buy the World a Coke."


Everyone agrees that the ending is deliberately ambiguous. That's another aspect of good drama. It leaves you with a sense of finality which is simultaneously undetermined.

It's easy to think that Draper is said to have created the ad. Throughout multiple seasons of the show, it was discussed repeatedly about how amazing it would be to write a spot for Coca-Cola. Coke products were also discussed again and again in the final story arc. Series creator and principle writer Matthew Weiner even got homophonous in having Joan sniffing coke the drug with her then-boyfriend.

It's no coincidence that actual cocaine was used in the making of the cola beverage early in its history--it's where the name derives from in fact.

But just as a life of cocaine was not what Joan needed or wanted to be happy, neither was Don going to be happy working for Coca-Cola.

That's why he couldn't have written the ad. Not because he didn't have the talent to do so but because he finally realized that his whole life was nothing but a series of staged fantasies, just like advertising itself.

No product is ever as good as its advertising and simultaneously while everyone was jealous of Donald Draper's situation as a rich guy doing interesting work and having lots of sex, in reality, he was never as happy as others might have thought he'd be.

In the end, Dick Whitman found happiness by finally coming to terms with himself by ceasing to run from the totality of his life experience: his miserable childhood, his accidental killing of another human being, and then the elaborate series of lies that he told as he repeatedly reincarnated himself as Don Draper.

Dick/Don's moment of catharsis came when he realized that he was actually the same person as the man who broke down in the chair during one of their self-help sessions. Both of them were desperate for love and yet never found it--not because it was never available but because deep down they were both emotionally insecure. The man in the chair never had the success at masking his unease but ultimately both men were running from themselves and from others.

The usage of the "real thing" ad was meant to be an inversion of the words of the jingle. Advertising is not real. Donald Draper was not real. Our star found peace when he went back to being Dick Whitman, a man with nothing but his name. But now he at least was finally being true to himself. That is the real thing, not a touchy-feely ad for a sugary drink or some cheesy hippie ripoff of Hinduism.

Dick Whitman found happiness because he came to terms with himself. It's something that everyone should do--particularly people who came from such challenging environments as he did. The past is not something to run from but rather something to embrace and learn from. We must live in the present but no one can divorce himself from who he was. That, to me, is the final message of "Mad Men."
Posted by Matthew at 11:24:00 AM

Pretty Much a Ghost Town Here

In case you hadn't noticed, this blog is pretty much abandoned.

I've moved my blogging to my Twitter profile.
Posted by Matthew at 5:26:00 PM

You have to love a good fake photo. This blog post has a bunch. My favorite in the "If celebs moved to Oklahoma" list: 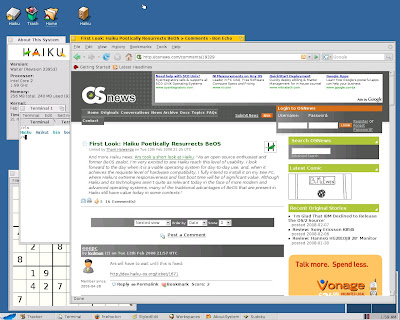 A positive development for interoperability:

The deal will enable the organisation to build software that will interoperate with those products.

The non-disclosure agreement was brokered on behalf of Samba by the Protocol Freedom Information Foundation (PFIF), an organisation that seeks to facilitate the exchange of free and open-source software information. PFIF, which is paying a one-off fee of €10,000 (£7,240) for the documentation, is part of the Software Freedom Law Center.

Samba's software, used for sharing files over a network and controlling networked printers, is designed to facilitate interoperability between Linux/Unix servers and Windows-based clients.

Andrew Tridgell, creator of Samba, said in a statement: "We are very pleased to be able to get access to the technical information necessary to continue to develop Samba as a free software project."

Samba expects that the agreement will allow the project to add features including full support for Microsoft's Active Directory, encrypted files, a better search interface and support for "SMB2", a new version of Microsoft's Server Message Block protocol from which the Samba project took its name. SMB2 is built into Windows Server 2008.

How to Spam a Poll

Ron Paul supporters and their techniques.
Posted by Matthew at 1:18:00 AM

The Atlantic has a short, interesting article about Google's Washington presence:

At the same time, many businesses overshadowed by Google have begun looking for political arguments that might slow its seemingly unstoppable ascent. “There is no company on the face of the planet that scares as many businesses as Google,” says Blair Levin, a telecom and media analyst at the financial-services firm Stifel Nicolaus. The most popular and potentially effective argument against Google is the charge that it has become a monopoly that needs reining in. (The political power of this criticism is increased by fears that Google will misuse the vast amount of personal data it has accumulated.) In late September, Congress held the first antitrust hearings concerning Google—the opening salvo in what is likely to be one of the most important business and policy stories of the next few years.

The computer world is in the midst of its next great transition, as many applications and services—word processing, spreadsheets, e-mail, data storage—migrate from the personal computer to the Internet. Success for all sorts of businesses will soon depend on whether customers have easy and fast access to these Internet-based applications. Because gaining primacy will involve winning battles over regulation and federal oversight, companies like Microsoft and the major cable and telephone companies are now squaring off against Google in an arena where it has never competed and they have: Washington.

Until recently, a company’s Washington strategy tended to evolve at the same pace as its business. As the company grew larger, it would add lobbyists and advisers to protect its interests. But as Microsoft grew more powerful in the 1990s, it mostly ignored politics. It had gotten to the top of the new economy without aid or interference from Washington—why change? Microsoft assumed the government posed no threat—until its competitors persuaded the Justice Department to launch an antitrust suit. Though the company avoided a breakup, its stock price stagnated for years.

Microsoft’s example illustrates a pro­blem that can plague any fast-growing tech company: You can control vast markets and terrify your competitors, but still be a Washington rookie. As the government focuses on Google, the city’s familiar machinery is gearing up for battle on the question of whether the company is the large but benign force for innovation its corporate slogan, “Don’t be evil,” suggests—or whether, like Stan [Google's T-rex corporate mascot], it’s a carnivore on the loose.

In a report published this week by security firm SecureWorks, researchers reveal that the recent flurry of Ron Paul spam originated from a Reactor botnet controlled by a commercial spammer through a colocation facility in the US.

The researchers analyzed header elements of the spam e-mails to trace them back to zombie systems that were infected with the Srizbi trojan, an unusual piece of malware with highly advanced features. According to Symantec research, which has independently studied Srizbi, the trojan is one of the first pieces of malware found in the wild to operate fully in kernel mode with no userspace code. Srizbi bypasses firewalls and packet sniffers by directly manipulating the kernel-level TCP/IP stack. The Srizbi trojan is largely propagated by the well-known msiesettings.com site, which is paid by spammers to deploy viruses and trojans for spam botnets.

SecureWorks collaborated with network administrators to analyze the traffic from some of the computers infected with Srizbi that were responsible for sending the Ron Paul spam. This allowed the researchers to discover the location from which the botnet was operated—a colocation facility in the US. The researchers collaborated with Spamhaus to get the server shut down and then obtained the source code used on the control system, a Python-based spam botnet management tool known as the Reactor Mailer. The logs present on the system prove that it was indeed the origin of the Ron Paul spam. Further research showed that other systems in the same colocation facility were also controlling various segments of the Srizbi botnet, and using it to transmit spam advertising replica watches and enlargement pills.

The evidence leads researchers to conclude that the Ron Paul spam was transmitted by a spammer called nenastnyj who operated a single node in a colocation facility and was likely affiliated with or renting access from the Reactor syndicate. The messages were transmitted by approximately 3,000 bots using a 3.4GB e-mail database file with over 160,000,000 addresses.

"While the total count of Ron Paul spam messages that actually landed in peoples' inboxes can't be known, it certainly was received by millions of recipients," writes the author of the SecureWorks report. "All this was done using around 3,000 bots—this speaks to the efficiency of the template-based spam botnet model over the older proxy-based methods. The front-end also plays a part in the efficiency, by allowing the spammer to check the message's SpamAssassin score before hitting send, simplifying the process of filter evasion and ensuring maximum delivery for the message."

Although it's likely that somebody paid nenastnyj to transmit the Ron Paul spam, there is no evidence to indicate that it was anyone directly associated with the Ron Paul campaign.